The board of English Premier League side, Everton FC, will meet and discuss future of Roberto Martínez this week.

The embattled coach has been facing serious pressure since their loss in the FA Cup semi-finals and protesters are expected at the home ground on Saturday. The coach was visibly frustrated with this side’s performance in the FA Cup game. 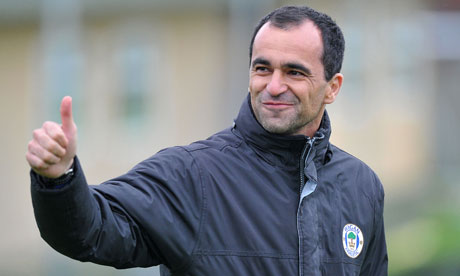 This week, the board of the club will meet to discuss Roberto Martínez’s position as Everton manager with the Catalan struggling to save his three year tenure at Goodison Park. The 42-year old manager insisted he was the right man for the job and that Everton were close to challenging for trophies after their stoppage-time defeat by Manchester United in the FA Cup semi-final on Saturday. The dissent growing among some of the supporters might eventually force the Everton directors to relieve him of his duties.

Everton’s Chairman, Bill Kenwright, is known for his stance towards the manager. He even spoke well about Martínez before the semi-final at Wembley. But Kenwright is no longer the club’s major shareholder after the British-Iranian billionaire Farhad Moshiri acquired a 49.9% stake in February and changed the make-up of the board.

Moshiri is not an Everton director but has appointed a long-term associate, the financier Alexander Ryazantsev, as his representative on the board. The chief executive, Robert Elstone, also became an Everton director after Moshiri’s investment and along with the long-time director Jon Woods and Kenwright, they will hold talks over the manager’s future before the Premier League game against Bournemouth on Saturday. Woods left his seat in the directors’ box at Anfield in the 60th minute of the 4-0 defeat against Liverpool last week.

The coach admitted that the Merseyside derby and United Cup tie amounted to a defining week for Everton. However, the results were unfavourable on both counts. The team remains 11th in the Premier League, having won only nine of 34 matches and recorded Everton’s lowest points total at Goodison on the basis of three points for a win.